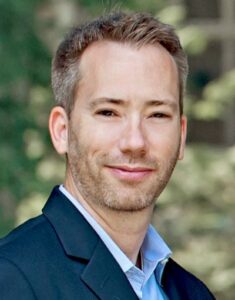 Prescott will receive the award Sept. 21 at the 20th Celebrate Invention, an annual event that recognizes entrepreneurship and inventions from University of Michigan researchers. The Distinguished University Innovator Award honors faculty who have developed transformative ideas, processes or technologies and shepherded them to market.

Years ago, Prescott launched the U-M Online Court Project to design and build technology to help people facing warrants, fines and minor charges resolve their disputes with the government and courts online and without the need to hire an attorney. This technology went on to become the basis for Matterhorn, a free platform made available by courts that allows vulnerable litigants of all sorts to resolve their legal cases entirely online.

Today, citizens can use Matterhorn as an alternative to in-person hearings in family courts, small claims courts and in general jurisdiction courts, such as resolving landlord-tenant disputes. Matterhorn, which spun out of Michigan Law in the form of Ann Arbor-based Court Innovations Inc. in 2014, has facilitated the resolution of more than 100,000 cases in more than 100 courts across 16 states. It’s believed to be the first technology of its kind in U.S. courts.

Meghan O’Neil, who nominated Prescott, said in her nomination letter that the innovation “has become invaluable during COVID-19” and “reduces racial and economic disparities throughout our justice system.”

“I understand that lawyers and social scientists are not typical recipients for awards of this sort,” wrote O’Neil, a researcher at the U-M Institute for Social Research. “(But) the university would do well not only to recognize Professor Prescott’s innovative work but to remind everyone at the university, no matter their department or field, that we are all innovators and can transform our world.”

Prescott has argued that courts are really just “a locus of legal services,” yet they remain inaccessible (or even dangerous) to some when they exist solely in the physical, brick-and-mortar realm. He recalled once taking most of a day to go to court to have what amounted to a 10-second conversation with a prosecutor to make a deal on a traffic offense—a minor inconvenience for him as a salaried worker yet a real but unnecessary burden for many, such as hourly workers, who may sacrifice hundreds of dollars just to have a fair hearing. He stressed the barriers to seeking justice are not evenly distributed in society but are overwhelming for some.

Prescott came to view using the traditional court system for most legal matters as “a regressive tax on struggling Americans.” This spurred him and colleagues to seek a better way.

“If you can’t go to a physical courthouse during business hours (or even a smaller window of time in some courts), you just don’t have the full protection of the law and you aren’t able to make the most of your rights,” he said. “Work obligations, child care needs and transportation costs make using courts prohibitively expensive for too many. The confusion and anxiety of going to court also falls disproportionately on the poor and disenfranchised.”

The project was part of the Global Challenges arm of U-M’s Third Century Initiative, a $50 million, five-year program that leveraged the university’s interdisciplinary expertise to tackle some of society’s most pressing problems while creating learning opportunities for students. Prescott worked with U-M Technology Transfer to create Court Innovations to grow the business opportunities emerging from his work.

The vice president for research selects recipients of the Distinguished University Innovator Award based on the recommendation of a selection committee that reviews a pool of nominees. The award was established in 2007 and is supported by endowments from the Office of Research and the Stephen and Rosamund Forrest Family Foundation.

“As a public research university, we have a responsibility to share our expertise and insights beyond our three campuses so that together we can address emerging challenges and strengthen the economy,” said Rebecca Cunningham, vice president for research and the William G. Barsan Collegiate Professor of Emergency Medicine. “Professor Prescott embodies the University of Michigan’s vision for serving the world through research, targeting poverty in the courts through innovative research and technology.”

After receiving the award, Prescott will participate in a panel entitled “Technology, Access to Justice, and Democratizing American Courts.” Other scheduled panelists are Michigan Supreme Court Chief Justice Bridget McCormack; Jason Tashea, founder and director of Justice Codes, a nonprofit focused on the impact of technology in criminal justice systems; and Bernadette Atuahene, law professor at Chicago-Kent College of Law, Illinois Institute of Technology, and a research professor at the American Bar Foundation. It will be moderated by Luke Shaefer, the inaugural director of U-M’s Poverty Solutions program.

The event, which will be webcast, is free and open to the public. To register, visit Celebrate Invention Event Registration.

© 2020 The Regents of the University of Michigan